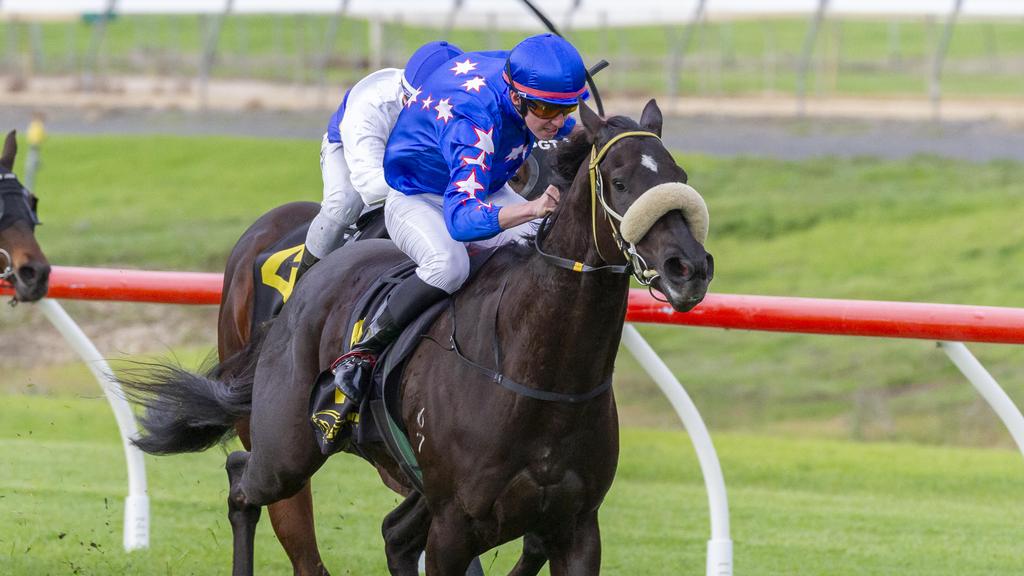 Outlaws Revenge bounced back from his rough Goodwood run and Fighting McLaren continued his upward trajectory as trainer Ryan Balfour and apprentice Campbell Rawiller stole the show at Morphettville Parks on Saturday.

Last month’s Group One wasn’t kind to Outlaws Revenge and Balfour was relieved to see him rediscover some form in the Junction Handicap (1250m).

Rawiller pushed forward from the widest gate to settle outside the leader Rohlon Drunk, sprinting hard late to secure his seventh win at start 17.

Punters abandoned the two-time Listed winner before the race – Outlaws Revenge drifted from $4.40 to $7 – but his trainer kept the faith.

“That was awesome, a little bit of weight off the shoulders because I’ve got high expectations of him. I believe in him,” Balfour said.

“You come into autumn carnival with a target and we got a little bit beaten up. In the Goodwood, he got poleaxed from pillar to post.

“You regroup and reset after that, so we targeted this race and it was good to see where he’s at.

“I put the ear muffs on him because he can be a little keen at times but he let down well and what we saw today, he might even go 1400m. I’m really hopeful in time he might be a sprinter-miler.

“It’s good to see him back in the winner’s circle there was a race here in a fortnight but now his rating will go up, we might have to look interstate.”

Fighting McLaren is also building an imposing record, notching his fifth win at start 10 with a bold first-up performance.

Rawiller was able to find the box seat from his inside gate before taking the shortcut and racing away for a comfortable victory.

It bodes well for the rest of his campaign with Balfour confident he’s still got plenty of upside.

“He’s shown plenty of potential and been very consistent. He’s a horse that always looked good but I thought he was going to improve off whatever he did today,” he said.

“I wanted to see where he was at under pressure with 200m to go and he responded great. I reckon I’ve still got 15-20 per cent improvement to come as well.

“We’ve just got to place him well, go through our grades and who knows where we’ll end up.”

“It was a great ride by Campbell, I can’t speak highly enough of him, behind the scenes he does so much as well.”