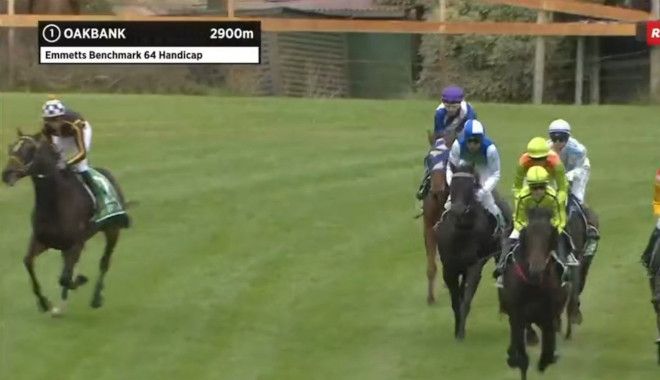 It would appear Campbell Rawiller has taken a leaf out of the same book as his father Nash, which has inspired a successful ride to claim the opening race at Oakbank on Easter Monday.
While the 2900-metre benchmark 64 contest may not have usually created such a talking point, the 20-year-olds masterclass aboard Plympton was hard not to draw comparisons with that of his father’s steer aboard Think It Over in the Queen Elizabeth Stakes recently, scouting via the outside fence.

“I had to really think it over at one stage, I thought of Dad at the top of the straight and I’m glad it paid off like it did for him,” Rawiller professed.

Rawiller’s ride sent onlookers straight into disbelief on social media with race caller Brett Davis describing it “bizarre” as it came to fruition across the line.

The Ryan Balfour-trained seven-year-old was a $3 chance and for the first half of the staying contest it was rather uneventful with Rawiller settling in a rearward position, but at the 1400 metres the apprentice opted to go solo and veer for the outside running rail.

At first causing confusion amongst punters including from race caller Brett Davis, it later became evident it was all of a well hatched plan that Rawiller had consulted with his master Ryan Balfour about pre-race.

“Just assessing how the track played over the carnival I thought it was really vital I got out there and had a good walk of the track,” Rawiller explained to Terry McAuliffe.

“Obviously being quite a long-distance race in the first I definitely thought if I can save anything in reserve coming to the last 200 metres I really wanted to find that edge.

“Walking the track I noticed the field really goes to the inside up the back straight and it had really taken a good beating and I wanted to get away from that.

“The more I walked the track it was very clear obviously stewards cars and things like that go around the outside and on assessment I thought it was going to save me a good bit of ground.

“It was a great, great result to have it all pay off.”