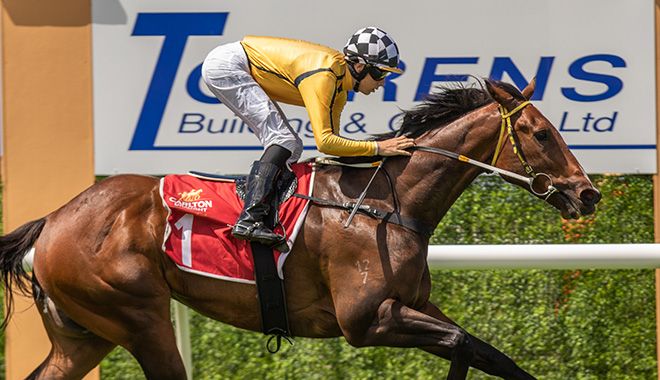 A winner at six of his 13 career starts thus far, South Australian sprinter Outlaws Revenge will return to the races on Saturday, looking to keep his impressive record intact.

The four-year-old will line up in the Group 3 Irwin Stakes (1100m) at Morphettville, following a 12-week let-up since his most recent run in the G3 Standish Handicap (1200m) at Flemington in January.

“He’s the benchmark horse in the stable that’s heading into these exciting races over the carnival and it’s great to be a part of it,” trainer Ryan Balfour said.

To tune up for his racing return, Balfour sent Outlaws Revenge to Balaklava for a race-day style hit-out with other SA stars including Behemoth and Bella Vella.

“We went up to Balaklava last Thursday just to try and really get that extra edge with our horses going into their first-up runs in the carnival,” Balfour said.

“We used the 1000-metre chute there, Will Clarken, myself (and) David Jolly, just organised some gallops and felt there was a great opportunity to have our horses match motors, it was a good hit-out for them.

“It’s really brought him (Outlaws Revenge) on so much, to have that little float trip as well, it really got him up and about.

“He was so bright-eyed and he was bouncing, and when I led him onto the track he took about four or five strides and had a little peep and a play and came out on the bridle and it’s really done him the world of good.”

Outlaws Revenge has never won first-up and Balfour has long stated the G1 Goodwood (1200m) in May is the long-range target, but that doesn’t mean the son of Reward For Effort won’t be thereabouts on Saturday.

“He’ll improve on whatever he does Saturday but we’re expecting him to still be very competitive,” Balfour said.

“I think he’s got improvement to come, they’ll know he’s there but he’s also running against six very good horses.

“This isn’t our grand final, it’s always been about the Goodwood.

Outlaws Revenge is a $12 shot with Sportsbet to win Saturday’s Irwin Stakes, and is a $51 chance to win the Goodwood next month.