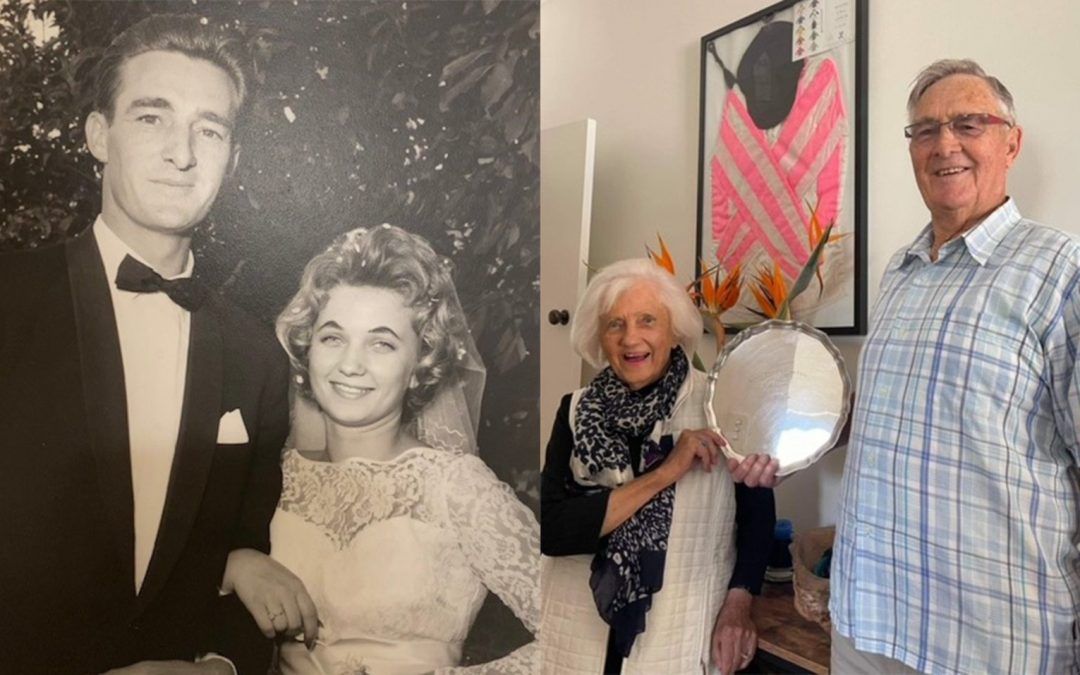 After 60 years of marriage its little wonder that Pat and Elga Barns finish each other’s sentences, but it’s their sense of humour that really cuts through.

The couple have lived in the same Bray Street home over-looking Morphettville Racecourse their entire married life, and Elga jokes that when Pat trained Rubiton to the 1987 Cox Plate he loved that horse more than her.

“That was the truth. I’ve learnt to live with it for 60 years,” Elga exclaimed.

Pat adding, “I truly do love Elga but it was always a very close finish between her and Rubiton. Sometimes he’d win, sometimes she’d win. But there wasn’t much between them I can tell you.”

Pat first became aware of his future bride when Elga was only a teenager and her family moved nearby in Morphettville. They’d only recently arrived in Australia from Latvia, and Pat would do tricks on his horse to try and impress her.

“I knew Elga from an early age because she lived around the corner, and she grew steadily into an attractive lady and I thought I reckon that’s the girl I’ll marry one day,” Pat said.

“I used to be riding horses here in my big yard next to Bray Street, and one day I went and got thrown off and I think the horse dragged me because I got caught up in the stirrup, and I think she thought I was showing off.”

“I was sure that he was showing off,” said Elga.

“There was nothing I could do about it because I was frightened of horses.”

Pat eventually worked up the courage to ask Elga out when she was 21, and they dated for a year before getting married on January 27, 1962

Elga remembers that everyone told her they weren’t suited, but the Latvian ways didn’t scare Pat off.

“A lot of people agree we’re not suited because they’re a different breed the Latvians,” he said.

“They drink a hell of a lot. They really like strong liquor and used to knock over those vodkas. They enjoyed a party, sang songs and drank a lot.”

As it turned out the Latvian upbringing helped Elga with all the socialising the Barns’ did at their Morphettville home during Pat’s 50 year career as a trainer. One of the many things he loves about Elga is her cooking.

“The house was always full of people. And I’d feed them that’d be my role,” Elga said.

“We had a very busy household during the trainer years. There were always a heap of people in the house especially owners, in and out of the house here there and everywhere, but as we’ve got older I don’t miss that,” said Pat. “I think it’s good that now we’re quiet, we’re older and we keep things on a much easier basis.”

These days Pat, aged 85, and Elga, 82, look across at the grandstand from their house on race days and keep an eye on the horses walking past. They still get a wave from many of the jockeys.

“It’s a wonderful spot to be in. We’ve got four blocks of land facing the race course and we’re in a very fortunate spot because it’s valuable land.

“We’d get a wave from previously my old apprentice Jim Mettam who was Clerk of the Course. And Anna Jordsjo – she’ll always give us a wave because she’s a family friend. Dominic Tourneur gives us a wave too so we’re in touch with a lot of the jockeys.”

A telegram from the Queen congratulating the couple on their Diamond Wedding Anniversary was a thrill, and they’ll mark the milestone with a low key celebration lunch at West Beach with daughter Michelle Wass and grandchildren Thomas and Emily.

They both agree after 60 years of marriage, and three children – Grant, Michelle, and Brett – they’ve reached a really happy spot.

“We’ve overcome all those problems in our life and we’re pretty rosy at the moment,” Pat said.

“My father lived until he was 91 so I hope I can go past that. And I want Elga to make it too because I don’t really want to be around without her. I think she’ll be terribly missed when she goes, please don’t let it be for a long time.”

“We couldn’t do without each other,” adds Elga.